Physical copies of the 64-page index of G.I. Gurdjieff Paris Meetings 1943 are now available for purchase below from The Book Patch. 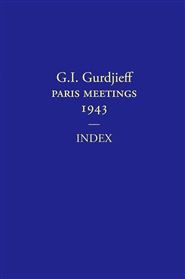 The importance of this text must not be underestimated as a primary source, and Mr. Gurdjieff himself raises the estimation of its importance in an aside to the transcriptionist, addressed here and throughout the text as ‘Prosecutor’:

“Gurdjieff: ‘Prosecutor’, everything must be written in good French. These are abstract things. But if you can remember everything, it will be useful for everyone. I am the author of Beelzebub, neither more nor less. If I find material for myself in what you write, I will be able to do new things with it. Many things for the future humanity depend on you. And it is true, all joking aside.” (p. 306)

With attentive reading, Paris Meetings 1943 can serve as good material especially for teachers of the Work—how meetings were organized, how they were conducted, how exercises are given, how to observe and diagnose symptoms of problems students have, and how to direct students to work on themselves—not automatically but consciously and heuristically—in addition to the contents of the teaching itself, useful to teacher and student alike.

Astute readers may pick up on themes given more significant weight here compared to earlier materials: having remorse of conscience, engaging in the duties of parents and children, the importance of preparation and relaxation before exercises, playing a role in life, and the bringing of sensation, feeling, and thinking into contact and harmony through the use of attention.

Paris Meetings 1943 is a welcome addition to the primary source texts of Gurdjieff’s teaching. If more transcripts of subsequent meetings still exist, I look forward to the translation and publishing of additional meeting transcripts in the future.

One small thing was lacking from Paris Meetings 1943—an index. I have created one, available for purchase:

The first time I can recall learning about Mr. Gurdjieff was in 1995. My wife and I were honeymooning in Vermont. While strolling along Church Street, we wandered into a book shop. There I found a book entitled “The Lucid Dreamer” by Malcom Godwin. At the time, I was fascinated with dreams and with lucid dreaming in particular. The book was full of surreal art, quotes, and anecdotes of persons who in one way or another made some contribution to the topic of dreams and sleep.

One particular sidebar in the book struck me. Pictured in it, nearly in profile, was an old yet strong man, with a shaved head, a white upturned moustache, and dark eyes gazing as if into the distant future. 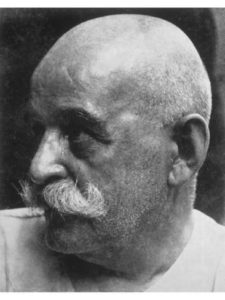 “Georges Ivanovitch Gurdjieff was a charismatic teacher, writer, and mystic who maintained that everyone was actually asleep, and only when awakened we would understand that we were only dreaming we were awake.”

For me, this was a new idea, that everyone was asleep and must wake up—everyone including myself! What does it mean that everyone is asleep? The idea stuck with me, though its full weight would not be impressed upon me until many years later.

I was pleased to hear the news that Wizards of the Coast was opening up an avenue to self-publish Dungeons & Dragons 5th Edition content, called Dungeon Masters Guild, and I knew immediately what I wanted to do when I heard the news—publish the Genie Palace Heist adventures.

So after a few weeks of illustrating, editing, and formatting, I have finally published my first in a series of adventures: Alabaster Palace of the Dao. Here are screenshots of the first few pages. 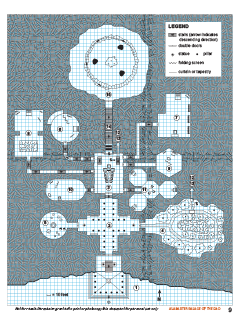 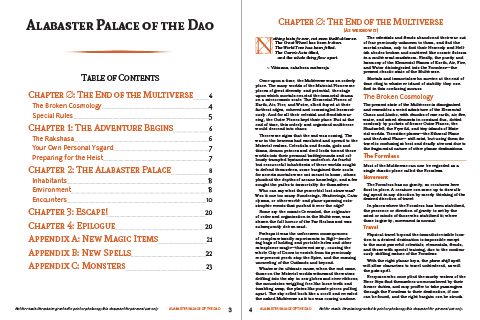 Page 3-4: Table of Contents and Introduction

I set out to evaluate 3DML for use as a 3D mapping tool for my tabletop games.

Back in early 2000, I stumbled upon 3DML and was impressed at how easy it was to use to create 3D content on the Web. I built some spots based on the environments in the campaigns I was running at the time (Mage: the Sorcerers Crusade and Dungeons and Dragons 3rd edition).

Later, when scripting was added as a feature of 3DML, I wrote a script that allowed me to toggle the camera from first person to top-down—perfect for viewing 3D maps.

3DML stands for three-dimensional markup language. The intent behind the language is to make 3D content creation on the Web as easy as writing HTML.

As surprisingly little code as what follows will be rendered as a basic 3D scene, called a “spot”.

Currently, the only way to view 3DML content is to use a standalone browser called Flatland Rover; the browser plugins of the same name only work with relatively archaic browser and operating system combinations.

3DML was created by Michael Powers, who co-developed Flatland Rover with Philip Stevens. Michael, Philip, if you have future plans for 3DML or Flatland Rover, let me know.

What is the status of 3DML?

Much 3DML content on the Web can no longer be viewed because model dependencies (“blocksets”) originally hosted by Flatland.com have not been maintained.

And current and emerging 3D web technologies such as WebGL do not require special plugins or standalone browsers for viewing content.

The benefits of current 3D web technologies surpass the ease-of-use of 3DML in its current state. Also, I think I would benefit more from learning a modern toolset such as Blender than use what sadly appears to be an abandoned technology.

I have fond memories of the builder community and the 3DML spots we created. I would love to see its revival in the future.

I will continue to keep my 3DML reference materials, blocksets, and spots available.

This was my tabletop gaming setup from 2011.

It was assembled with the following components:

For 30 years, I used the traditional approach to running tabletop RPGs: drawing maps with washable markers on a vinyl grid mat. Frequently, game play was interrupted by the need for me to erase and redraw the map. So I decided to devise a technological solution.

I considered the original version of the Microsoft Surface (now rebranded as PixelSense), which was a touch screen computer with the form factor of a table. But at $10,000, it was outside of my budget.

Then I considered using an all-in-one touchscreen computer oriented horizontally to display pre-drawn maps. This did have the advantage of a self-contained solution. But the largest touchscreen computer at that time was 27 inches. And I was also concerned the computer might overheat or its components might not work in a different orientation that it was designed.

I decided instead to use a flat screen TV connected to a computer. Since the TV component should also serve its original purpose, I also needed to find a way to tilt the TV to any desired orientation.

Typically, flat screen TVs do use wall mounts; some allow a small degree of tilt, but none of them could tilt 90 degrees. I search for a long time until I found POS monitor stands that could tilt, swivel, and lock in any position I needed. The POS monitor stand could only support a certain amount of weight, so this influenced my selection of TVs. The largest and lightest flat screen I could find was a LG 37 inch. The screen is guarded against scratches and fingerprints by a transparent acrylic anti-glare TV protector. The anti-glare aspect of the protector was an exaggeration on the part of its manufacturer, but its 1/4″ thickness completely protects the screen from flying dice or dropped metal miniatures.

Since last December, I have improved the portability of the setup significantly. I replaced the Mac Mini and Apple Display with a MacBook Air. This required the addition of a Thunderbolt-to-DVI adapter, since the MacBook Air does not have a DVI port. And I use a mid-2012 Mac Pro Server to host to serve all of the content I need for a gaming session (maps, reference books, character sheets, pictures, music) to the MacBook Air.

Now rather than erase and redraw the map, I simply open a new map on my laptop and drag it onto the screen for the other players to see. I also use iTunes to queue up and play music through the TV speakers to set the mood.

Before a gaming session, I use Photoshop to draw maps of the various dungeon, city, and wilderness environments the player characters will experience. Like traditional maps, they are 2 dimensional representations of a 3 dimensional environment. I want to take the maps to the next level, and make them 3 dimensional. I am considering two approaches.

Blender has the advantage of being a current technology. And it is also free. But to create maps in Blender, I would be required to learn how to use it. While I see knowledge of Blender as a valuable addition to my toolset, it will take time. And speaking of time, I have no idea how long it would take me to build maps in Blender on a regular basis.

3DML has the advantage of its ease of use. It is something I already understand how to use. I could create new maps rapidly and easily with it. It has the disadvantage of being an unsupported technology, which I hope to see revived as a supported and thriving technology.